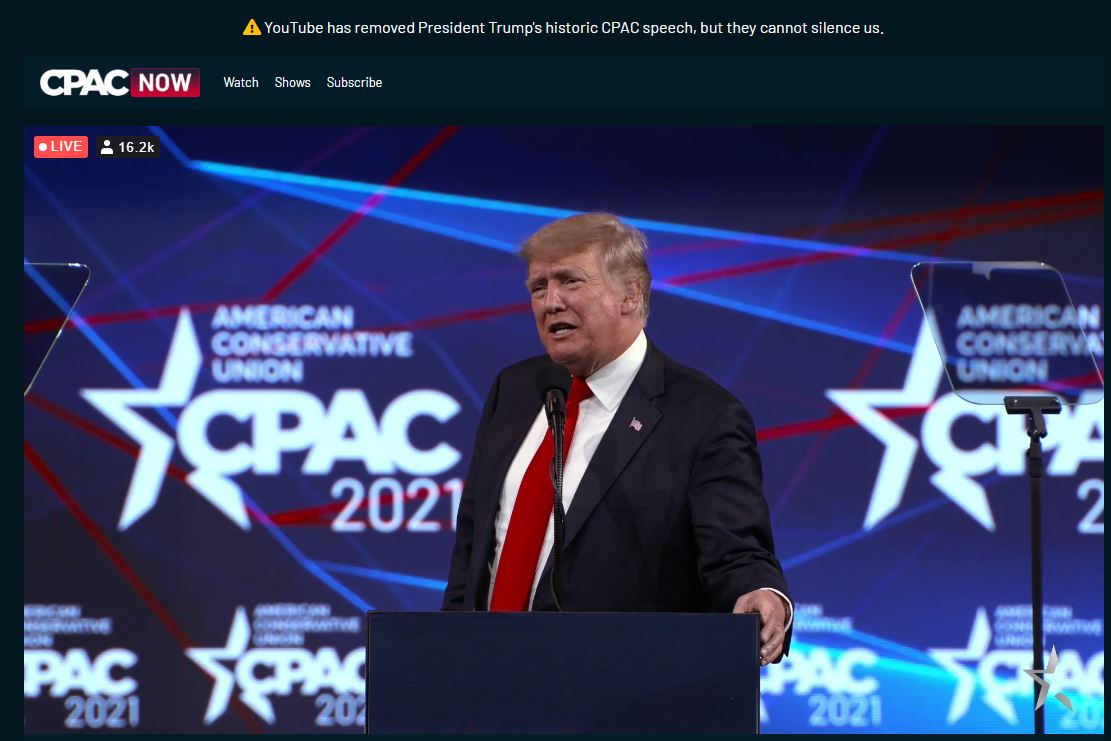 Reported from The Epoch Times:

Watch Live Coverage at Right Side Broadcasting Network at https://www.youtube.com/watch?v=ZU7ffEARO-E – If deleted go to Rumble to https://rumble.com/viuh7z-president-trump-live-on-the-water-cooler-show-with-host-david-brody.html?mref=40n2v&mc=803cr

YouTube “issued a strike against” the group’s account two days after the video was uploaded on July 9. The big tech firm, according to the statement, also “banned the organization from posting for one week.” “As a result, YouTube has prevented ACU from sharing content from CPAC 2021 Part 2 in Dallas, Texas, including former President Donald Trump’s speech on Sunday, July 11,” the statement said. Trump is scheduled to deliver CPAC’s headliner speech on Sunday at 3:35 p.m. CT.

According to the ACU, YouTube said their video contained alleged “medical misinformation” regarding COVID-19 for the reason why it removed the video. The group said YouTube didn’t cite any examples that violated their policies. “It is clear that YouTube censored CPAC because we stood with former President Donald Trump on his lawsuit against Big Tech,” said ACU Chairman Matt Schlapp. “This is yet another example of Big Tech censoring content with which they disagree in order to promote the political positions they favor.”

The ACU’s statement suggested YouTube opposed a comment from Trump referencing studies about hydroxychloroquine and saying it is effective in treating COVID-19. But, according to the group, “Google’s political biases heavily influence YouTube’s definitions of ‘misinformation’ and that the political beliefs of Google executives take priority over the free speech rights of Google users.”

Schlapp told Fox News that Trump’s speech will highlight the fight against Big Tech and the fight against illegal immigration—the fight to fire Nancy Pelosi and Chuck Schumer,” referring to the 2022 midterm elections. And Trump announced last week that the class-action lawsuits against the social media giants and their CEOS are about protecting the First Amendment right to free speech. They argued that Trump’s rights were denied when the three big tech companies banned him.

Twitter, Facebook, and Google said in January they banned Trump over his claims that the Nov. 3 election was stolen and alleged he contributed to violence during the Jan. 6 protest. Trump has categorically denied those allegations. The former president’s lawyers have argued that Twitter, Facebook, and Google have “ceased to be private” companies and cited the Section 230 protection shield that such firms employ to protect themselves from liability. Republicans have argued that the federal rule has allowed big tech firms to censor their political opponents, while some have gone further, arguing that social media giants should be regulated as utilities.